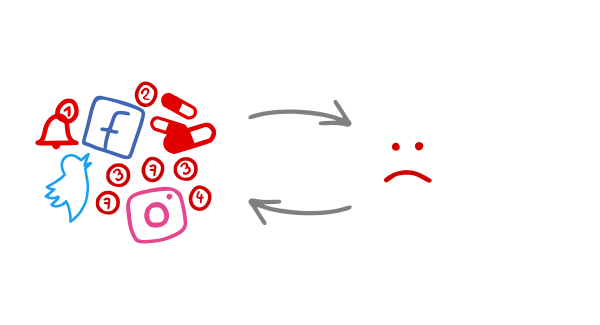 Are you really addicted to your smartphone?

Or is it a made-up story to scare you?

One of the common arguments is that people were scaring others with the danger of books, cinemas, radio, TV at the time when they were the cool innovation.

This is an argument for why it’s a little bit different this time with digital addictions. The Internet has the qualities needed to get us addicted to a much higher probability than we’d like to admit.

I don’t want to cause moral panic, I love technology and I think there is no other way than to use it.

However, it’s important to know how addictive it can be so you can tame this beast and use it in a healthy way.

Is Internet addiction a thing?

As we’ve talked about it here, dopamine helps us with learning. Your brain wants to repeat the things that released a lot of dopamine, so it remembers what it was and everything associated with it really quickly.

If you want to test out how quickly your brain learns via getting hits of dopamine, try this:

Change the location of icons of the most distracting apps on your phone. Create new folders, hide the icons into them - the next time your brain is bored and goes instantly to the same location, as usual, it won’t be there. Keep it in the new folder and watch how quickly your brain rewires to find this location - after a few days, you’ll find it without any thought needed. Pure habit.

In the past, it was super helpful for our survival. You easily remembered where the stream of water was, where the best place to hunt was, or what noises to make to get a mating partner.

Since the time of having only natural rewards, people invented quite a few artificial ones that can produce much more dopamine than natural rewards ever could. However, it wasn’t until the last decade that we adopted a way to get a dopamine hit that’s just one click away and always with us.

Why Internet-related addictions are such a thorny issue

We use it all the time

Addiction is about the brain learning to remember where to find an easy reward again. You might be thinking that cocaine should also get more people addicted than smoking because it produces much more dopamine than smoking. In reality, it’s the other way around - way more people (of those who try it) get addicted to smoking because smoking leads to more frequent small hits of dopamine.

Smartphones and the Internet are similar to smoking. They give us many small hits throughout the day that condition our brain to realize it’s rewarding.

You can’t leave the Internet

In the 3rd decade of the 21st century, it’s not viable for 99% to leave the Internet altogether. This makes overcoming any addiction more difficult. Imagine trying to overcome alcohol addiction but having to drink a few beers every day.

If you don’t live in a rural part of the country, chances are that you have access to the Internet everywhere, all the time. Imagine trying to stop smoking but you have unlimited access to cigarettes that are always on your table or in your pocket.

This is closely related to the previous one, but only magnifies it. Not only do you always have access to it, but it’s no hassle. It’s convenient. It’s easy. You have all the available entertainment one click away - Instagram, Netflix, Youtube, Twitch.

Imagine that you have a lighter next to your cigarettes and you’re allowed to smoke everywhere.

Not only is there always something new when you come online (constant novelty), but you also never know what exactly awaits you - sometimes it’s less exciting, sometimes it’s more exciting - new messages or posts on social media, what new crisis you will find by opening the news.

Companies learned to take advantage of this so-called variable reward ratio schedule. The short explanation of it is that if the rewards are unpredictable (likes vs no likes) and at random intervals, we repeat a behavior (like checking Twitter) again and again. Companies want you to come back. They profit off when we come back by showing us more ads. So they build apps that take advantage of the variable reward ratio schedule.

Society disregards it as a problem

Whether society accepts something makes a huge difference. For example, in China, 60% of male population are smokers, yet only 3% of women are smokers because it’s socially unacceptable for a woman to smoke.

Behavior addictions are often disregarded and not thought of as proper addictions.

Internet addiction isn’t seen as a real problem, or it’s not looked down upon by society.

Humor is often used to disregard the problem.

Also, everyone is doing it so it looks acceptable.

Because of all these, people don’t think they have a problem. Admitting and accepting that you have a problem is one of the first steps towards recovery.

In the past, we wanted to dissect every single Internet addiction - then we realized there are so many - smartphone addiction, information seeking, web surfing, news, reading discussions, reading manga, shopping, Netflix binging, youtube, twitch, social media, Tinder, video games, Reddit, and many more. That we couldn’t describe all of them (even the most pressing ones).

We realized that most of these specific addictions happen because of the same 2 general reasons:

When you don’t address these underlying reasons, overcoming Internet addiction will be a lot more difficult.

For example, when someone feels alone and decides to stop watching Twitch for 8 hours a day - they address the symptom - watching Twitch - but they didn’t do anything about feeling less lonely. So either, they will keep returning to Twitch or find a new way that will make them feel less lonely. Ideally, they would join a real life community but often they end up with another Internet compulsion - for example they start debating on Reddit.

The problem with these symptoms (different internet addictions) is that they can make the underlying reasons (causes) much worse.

Watching Twitch for 8 hours a day isolates the person from the last few friends they had left, and from society in general

Playing video games all day long to escape stress doesn’t teach you how to deal with real-life stress and doesn’t usually make the thing that’s stressing you out go away. It usually only worsens the stress because the deadlines are getting ever closer.

Constantly surfing the Internet and jumping from site to site to escape boredom makes the boredom temporarily go away. It becomes less fun after a few hours and then you’re bored again (if you didn’t find anything especially good to satisfy your itch) with your mind totally scattered and unable to focus on anything real.

In the extreme case, one keeps surfing the Internet because other than that, they’re an empty shell with no identity. However, in this way, you can’t build any identity, outside of apps.

The reality of it

After reading the previous parts, you might be thinking that we hate everything about the Internet.

The thing is that the Internet is an amazing tool but a terrible master. And sadly, it’s so easy to let it become our master (get addicted) due to unprecedented qualities we’ve already mentioned.

In the last few years, it has become fashionable to hate on social media and smartphones.

The thing is, it’s a nice story and it gets clicks. The news media outlets are also fighting for our attention.

However, there are also huge benefits when using the Internet. These aren’t mentioned in the media (or, for example, in the documentary The Social Dilemma) because they wouldn’t create such a compelling story. Less of the Internet isn’t necessarily better.

Again, the internet is an amazing tool but a terrible master.

So, the goal is to learn to use in a healthy way - the one in which the Internet enables you to be better, more productive, and more creative.

There is an ongoing scientific debate about whether the probably most widespread behavioral addiction - video gaming addiction - should be even called an addiction. And if so, what the methodology to diagnose this addiction should be.

The video game companies try to hide behind that fact and say: see there is no consensus in the scientific circles yet. We need to wait for them to conclude. They try to deflect. Of course, they do, because it’s business for them, and for example, if in the future, kids in the EU or the US are allowed only to play a few hours a day (like kids in China), they will lose a chunk of their business.

In reality, the scientists are talking about ensuring the details are clear, waiting for more peer-reviewed studies so they can include behavioral addictions on a scientific basis. Even the critics of adding video games on the addiction list admit that excessive use causes harm.

The point of this is not to wait for scientific consensus. If it causes a problem, it’s a problem. Even though it might take another decade for scientists to conclude that Internet addictions are real, we don’t have to wait. Problematic internet use has real effects - as described in this study.

A lot of people find themselves wasting too much time on the Internet and often find they can’t stop. Look at how many people can’t keep themselves away from their phone.

See for yourself, take on our challenge, reduce your compulsive use and see how you feel. The worst thing that can happen is that you will go back to it.

4 common blocks to starting on any creative task 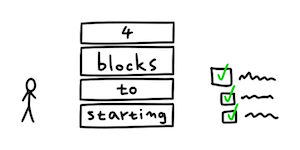 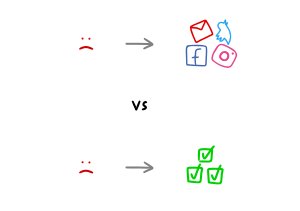