Do you feel like the Internet is causing you problems?

Maybe you’re looking for reasons why you should spend less time surfing the Internet.

Maybe you need a reminder.

It’s much easier to quit when you realize that something isn’t really as good as you imagine it to be and has plenty of negative consequences on your life. When you come to that realization and decide to quit voluntarily, it’s much healthier than trying to forcefully stop doing something.

This is a collection of arguments why one should stop mindlessly surfing the Internet, and why it can be harmful when you do it too much.

Of course, most of these problems appear when we start using it compulsively, and being online becomes our default behavior. The Internet is an amazing tool but a terrible master.

This is a list we’ve compiled and will likely expand in the future. Some of these arguments are original, some of them are just inspiration taken from the Internet.

People often know these subconsciously but are unable to put them into words.

Here are the reasons:

During the pandemic, it probably increased even further. And what can we show for it? Usually not much, because most of Internet browsing is just mindless consumption to distract ourselves.

All this wasted time could be used much better as this excerpt from a popular Reddit post describes:

If you think about it, we will be the first generation when there will be people laying on their deathbeds and they will talk about regretting wasting their life on the Internet. People regret it even now when they wake up from surfing compulsively.

Instead of giving likes, call the person, or meet up with the person and you will probably have a much stronger relationship.

You are what you consume

Be discriminating about what images and ideas you permit into your mind. If you yourself don't choose what thoughts and images you expose yourself to, someone else will, and their motives may not be the highest.

Most of what we consume is garbage, one Redditor described it quite precisely:

You know those tabloid magazines you would see and then think "who reads this crap?". Ya that's 90 percent of the content on the internet now and you're hooked. (Source)

You watch other people lives while not living your own

Surfing the internet, watching video after video of people do their thing on YouTube or other platforms is just watching them live their lives and be productive, while I stay on my seat and stay unproductive. (Source)

This often happens because people are lonely and feel like their favorite YouTuber or streamer is their close friend. This is called a parasocial relationship because it’s only one-way. If the YouTuber has a larger audience, they have no idea that you, the person that thinks about them as a friend, even exist.

On the other hand, if you stop wasting time on the internet and start living, you’ll probably build a life that others will desire (though this isn’t a good motivation to change).

You need to develop your own identity

People often figure out that without the internet, they don’t have any identity. They’ve been mindlessly surfing for so long that without staring into their screens, their life is empty. That’s why they keep doing it to distract themselves so they don’t have to think about it.

Surfing the internet isn’t a neutral activity - it makes you feel numb. It overwhelms your brain and you don’t have time to process your thoughts.

You have too much input that is only one way. You consume but you don’t process or create anything.

We talk about this all the time, but it’s important to give yourself time to be bored, to think for yourself, to contemplate. If you don’t do this, you will be less creative, you won’t give yourself space to come up with solutions to problems you have to deal with.

Sometimes you even get to a point where surfing isn’t fun, yet you don’t feel like doing anything else, so you keep surfing and feel like sh*t.

It disrupts your sleep

Not only do we go to bed later because the internet is exciting, or because we just veg out on it and don’t want to do anything else, but we also fall asleep slower because all the unfinished business comes back to us when we’re trying to nod off.

We don’t give ourselves enough time to process the thoughts that’s why we can’t fall asleep. We keep thinking. Most people solve this by falling asleep while surfing. They basically doze off out of sheer tiredness.

Whenever you open social media, it’s like a casino, you never know what awaits you and it’s exciting.

This is called variable reward ratio scheduling and it makes pigeons, rats, dogs, and humans more motivated to engage in the behavior if they don’t know when and what reward is coming.

It’s how slot machines work. The companies behind social media know this mechanism and they take advantage of it. It’s why posting a new photo can make you feel exhilarated because you take a risk and don’t know how many likes it will get.

Your brain quickly learns that the reward might differ but it’s sometimes overwhelmingly good.

This means that whenever you feel bored or stressed, your brain nudges you to pick up your phone and there is a probability you’ll be rewarded with more likes.

We have different interests than the social media companies

Let’s start with a basic premise - if you’re not paying for the product, you’re the product.

This is where the conflict of interests lies.

They are interested in us coming back as often as possible and spending as much time as possible there.

However, the reason why we generally use social media is to stay in touch, up to date with the latest happenings, and be socially accepted. For this, we could visit social media once in a while (once a day or once a week) and our needs would be probably met. However, this wouldn’t make them as much money.

They also know we want to be admired, liked, socially accepted - so they notify us whenever we get a new like, comment, etc. because it makes us flock to their app ASAP.

Fix your life before another crisis comes

Instead of improving your insufferable life, you mindlessly scroll through social media and/or comment worthless opinions to people that simply don’t care. What a waste of time! Go live your life and do what you know must be done before you hate yourself into another existential crisis.

Gone for a day? FOMO; Gone for a week? No problemo

Let’s say you’re following a drama caused by an influencer. Other influencers react to it through their Youtube channels and it goes on, on, and on.

Let’s say you don’t have access to the Internet for a month. You come back and see this drama and you realize how pointless it would be to go on and watch the drama unravel from the beginning to the end.

Social media is narcissistic and almost nobody cares

You think you're unique and special but you're just like everyone else who thinks exactly the same. I look back and I ask myself why would anyone care about me enjoying myself at the beach? Source

Except for your family and few close friends, nobody cares.

Reading the news is a waste of time

The news doesn’t want to inform you, they want to cause emotions and entertain you so you come back. Just watch this video to see how crazy it can get.

That doesn’t mean that you can’t read news, but it’s much better to do it once a day or a week for a few dedicated minutes by reading quality news. You’ll probably have a better understanding (and more peace of mind) than most people.

Engaging in Internet discussions usually doesn’t lead to anything

Of course, there are few niche communities where one can have a great discussion - e.g. Discord.

However, discussing topics like politics, social issues, or economics rarely leads to anything. Most people who have the time to comment on news are usually unhappy, toxic, and usually less smart than they think. Some people want to simply troll, others are trying to get likes, not a better understanding of the topic. There is almost no way of changing anyone’s opinion and even if you do manage it, it doesn’t move the needle.

If these statements resonate with you, it’s probably a good idea to do a dopamine detox (the right way). 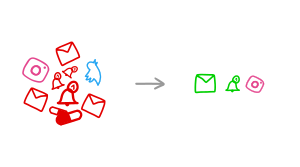 The danger of expecting work to be easy and fun 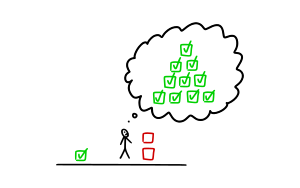 How not to get overwhelmed by tasks