How to start working after you procrastinated the whole day

“I’ve been procrastinating the whole day.”

“I haven’t done anything today, I’m such a loser.”

“Nothing done, again. Why do I always end up watching YouTube videos?”

All of us have experienced a day when we’re surfing the internet the whole day instead of doing something productive.

Let’s say it’s already late afternoon, what are you going to do?

Most of us, if there isn’t any scary deadline looming close, say “what the hell, might as well continue” and waste the rest of the day.

It’s called the What The Hell effect.

The best example of it is when people diet.

They eat healthy for some time, but then they slip. They eat a donut or drink soda.

“What the hell…” and then they go on a binge eating streak.

This is binary thinking - 0 or 1. I was eating healthy (at 1), but then I failed by eating something unhealthy, I’m at 0 and whatever I do now doesn’t matter.

But it does matter. After the binge is over, regret and low self-esteem flood in.

And it works the same with productivity. I haven’t done anything yet, therefore I’m 0, I’m a loser. You can also hear: I don’t have enough time to do something now or I’m already tired. Might as well finish that TV series.

Why do we let ourselves get away with doing this?

Because we love resets: starting tomorrow, starting next week or starting on the New Year.

All these resets have something in common. They’re in the future and we naively think this time it’ll be different.

Can it work? Kind of. Some people can really change their lives by resetting. But simply remember how gyms are full at the beginning of January and how soon they empty out.

Also, this concept of reset still has the same problem. The Binary Thinking. When you don’t go to the gym once, you failed, you’re a loser now, again.

Because resets fail most of the time, we shouldn’t bet on them.

What to do instead? It’s very simple:

It is possible to be at 1 or 0 but in most cases, it isn’t worth it. We don’t have to be perfect in our diet, productivity or life in general to move forward.

If you work 40 hours per week and you procrastinated the last 5 of them, you can still be at 0.875. You don’t have to be productive every single waking hour anyway. Quality over quantity is what counts.

All of us fail once in a while and it’s fine. It‘s human.

That also leads to...

Mindset Shift #2: You don’t have to say What the Hell

Whenever you realize that you’re off track, you don’t have to say what the hell.

Instead, think about who was the one who wanted this goal. It was you.

Do you still want it? If so, then acknowledge you failed a little bit. But if you want, you can still hit the target as closely as possible. To be 0.93 is better than 0. Even 0.5 is way better than 0.

That’s it. It is such a small thing, but it can be life-changing. It works as a nice relief.

What if you really don’t want the goal? Then it is fine. All of us have some fake goals that are just wishes or dreams that we don’t really want and we’re faking it because of some internal or external pressures.

When you realize something is a fake goal, please don’t feel guilty about not pursuing it. Instead, find a goal you feel more motivated to pursue.

Okay, now you have the correct mindset.

Let’s finally get to work.

If you were surfing the internet all day, you’ll notice that your mind is restless. You can’t focus properly. You might want to quit immediately.

There are 2 possible ways how to solve it (combine them for the best results):

The best one to calm yourself down is to sit down on the chair for 5 minutes, turn off the screens, and just stare at the wall or close your eyes.

Breathe. Take deep breaths. Or focus on your inhaling and exhaling.

Our brains are usually full of dopamine hits from the internet and we’re overwhelmed. You know that feeling.

2. Do the bare minimum

It’s difficult to start because we’re scared that it’s the end of fun. Or you might be scared by the sheer amount of work or scale of the project ahead of you.

Then make it less difficult or less scary:

Set up a timer for 5 or 15 minutes and do a quick outline.

Take a paper and a pencil and sketch out the first draft. Get the first quick and dirty version. Get from 0 to 0.1.

Once you’re working, you’ll realize it’s easier to keep working than it was to start working. When you get into the work, you will become curious about the problems it entails and you can even start enjoying the work you’re doing. You can get into the flow.

When you realize you’re failing to achieve your goal:

Even if your day didn’t go according to your imagination (didn’t get to 100%), it doesn’t mean it has to end at 0% satisfaction and 100% regret. 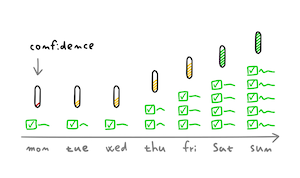 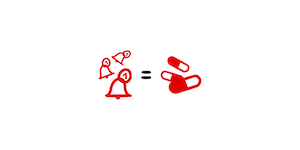 How to Focus on Work 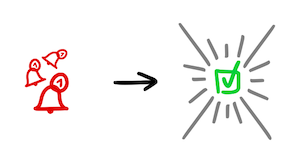