How to change for the better

Or do you feel like you move 2 steps forward, 3 steps back?

Change isn’t easy but it is possible.

There are 2 basic approaches to change:

Additionally, there is one underlying factor that can either support change, support the status quo, or even cause change:
Environment

Let’s say you want to quit smoking cigarettes. There are 2 possible approaches:

Evolution approach:
Trying to reduce from a pack of cigarettes per day to a half, then a quarter, and then none at all. Or using nicotine patches.

Each approach has its merits and risks.

This approach is based on getting better gradually. You slowly add things to or subtract them from your life.

It’s often described as getting better by 1% every day, building habits, or as the kaizen method.

This sounds like the best thing in theory but sometimes it isn’t that simple in practice.

Sometimes the improvements are so small that they aren’t visible so they don’t motivate you. Or this method doesn’t allow you to get better because the change is so small that it’s not effective. Doing one push-up won’t get you into shape. Meditating for one minute won’t calm you down.

Additionally, whenever we lose motivation and go back to our old behaviors, we don’t move forward at all. Why? Because the change achieved was so small.

When to use this approach?

We still think this approach is viable, however certain conditions must be met:

The best time to use this approach is when you’re adding to your current routines and also your life doesn’t depend on it.

Learning to floss: you already brush your teeth, so you floss one tooth right after.

Eating healthy: add a fruit or a veggie to your diet → you already eat a few times per day, simply adding a piece of fruit or veggie to one of your meals is simple.

In other more serious cases, it’s simply not enough.

Revolution is one large and sudden change.

If you wanted to change, you would start changing now or soon enough, and not use artificial dates.

People use resolutions because they give themselves a license to continue doing what they’re doing for now. It’s an easy excuse for further procrastination.

This is the last time I’ll do that… I’ll change after that day.

We’re overly optimistic about our energy and discipline in the future. In reality, we’ll feel about the same as we feel today.

This approach shouldn’t be discarded because of it. There is a type of revolution that is different.

It’s called the crystallization of discontent.

You keep doing (or not doing) something for so long that it makes you hit rock bottom.

You game every day for months and months, and one day you realize you’re addicted to games, and the gaming makes you depressed and you hate yourself. So you decide to stop.

You keep avoiding work for so long and it drives you crazy because of all the missed opportunities. So you decide to overcome procrastination no matter what it costs.

You keep overeating and you realize that you became fat. You decide to get back into shape.

There's a long period of discontent that crystallizes in one moment. That moment suddenly causes epiphany and can lead to larger changes in life - quitting a job, getting a divorce, committing to a large change.

The largest risk is failing hard and decreasing your belief in yourself for the next time you try to change. People think that from the moment they decide to change THEY HAVE TO BE PERFECT. This works for the first time. There are people who quit smoking cold turkey and never smoke another cigarette.

However, if you break this rule for the first time, you will destroy the sacred commitment you made and more failures will often keep on coming.

If this happens, you need to start looking at failure differently. You need to view it as a learning opportunity and look for why you failed. View it as an experiment. Then you need to try removing the reasons why you failed so it doesn’t happen next time. Also, you need to try to keep prolonging the length of time for which you were successfully following your intentions. You didn’t smoke for a week. Then you failed because of a party. You realize why it happened. The second time you last 3 weeks etc.

Sounds like a lot of work? Yeah, that’s why you shouldn’t break the sacred commitment. Breaking it the next time is much easier...

The second common mistake is trying to change too many things at once. Maybe your life is in shambles. However, your life didn’t become like this overnight so you can’t expect to fix it overnight. We have only so much attention per day and it’s important to focus it on the most important part of life that needs to improve right now.

When to use this approach

The revolution approach should be used when there is something that won’t let you move forward until you resolve it. Something that is a large and debilitating problem in your life because it’s causing addiction, depression, anger.

Basically, you want to use this approach when if you don’t do the thing, you will slowly die inside.

The advantage of revolution is that you can see the improvement immediately.

Let’s say you don’t know how to deal with your emotions.

You decide that the best toolbox to deal with your emotions is to start writing a diary and meditate.

The evolution approach would be:

Start slowly, meditate 5 minutes per day and write 50 words into your diary.

The revolution approach would be:

Meditate 30 minutes per day, write 2 pages of your thoughts.

Or it could be even more radical:

Do a week long meditation retreat to figure yourself out.

With the revolution approach, you do the heavy lifting in the beginning when your motivation is the highest. As you can see, if dealing with your emotions is hindering you the most, the radical solution makes the most sense.

Now, there is another key factor that can greatly help or hinder your efforts to change for the better.

When their environment changed from super stressful to regular, most of them had no need to use drugs anymore.

The environment can either support change or it can be detrimental towards change.

If you don’t want to be on your phone all the time, but you keep it on your desk or within reach, you’re massively undermining your own intentions. Same goes for when you want to lose weight but keep sugary, calorically dense foods like sweet pastry or candy in your house.

Evolution:
Spending too much time on your phone → not leaving your phone next to your bed.

Wanting to eat more healthily → not keeping cookies in your house.

The examples of evolution are mainly shaping your environment in a way that supports the behavior you want to do.

Revolution:
Spending too much time gaming → selling your gaming console.

Not being productive in your environment → moving to a new city or a new apartment.

It’s much easier to establish new habits in a new environment.

Your environment can be the most powerful force in the change process. It’s much easier to start with a clean slate in a new environment.

What works the most?

Combination of all 3 approaches:

Like we said, successful change requires a lot of effort. The longer you have been doing or not doing something, the more ingrained it is, the harder change is

Whatever you want to change, figure out how to adjust your surroundings to support your efforts.

If you are unable to change your environment, you might need to get so mad at yourself that your discontent crystallizes and you decide to change.

And remember: Even if you fail, keep going. Get back up, figure out what went wrong, try again. Most failures aren’t fatal, you can try again, hit that Retry button like in games.

That’s how you combine the best of the both worlds.

4 most common ways of getting distracted 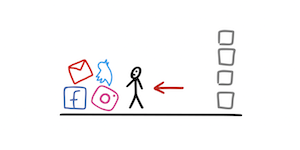